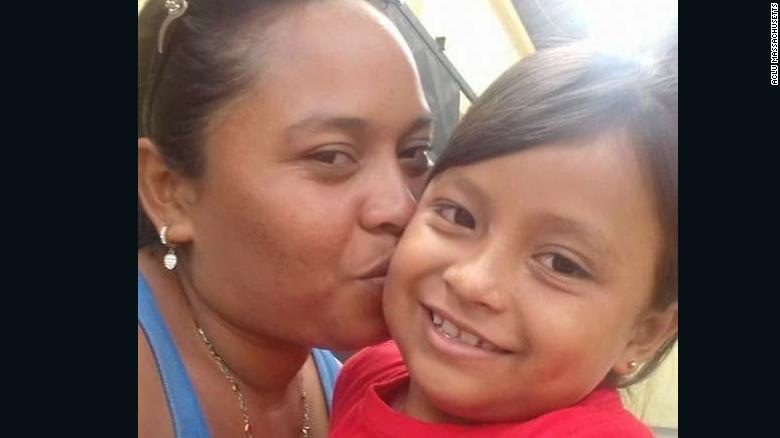 Angelica Gonzalez-Garcia and her daughter before they were separated at the US southern border.

(CNN)"Happy Mother's Day" -- that's what an ICE officer mockingly told a Guatemalan woman seeking asylum in the United States right before separating her from her now-8-year-old daughter a week before Mother's Day, according to a lawsuit filed Wednesday.

Angelica Gonzalez-Garcia and her daughter fled Guatemala for the United States citing abuse, domestic violence and discrimination in their homeland, according to the lawsuit. At first, they were detained together in close confines with about 40 other women and children in one cell inArizona. Less than 24 hours after they were first detained, Gonzalez-Garcia's daughter had been taken away by immigration authorities, the lawsuit says.After Gonzalez-Garcia was granted bond by an immigration judge, she flew to Massachusetts to stay with some friends, also from Guatemala. Now Gonzalez-Garcia, with the American Civil Liberties Union of Massachusetts, has filed a lawsuit in federal district court in Massachusetts against US Attorney General Jeff Sessions and various government agencies, demanding immediate reunification with her daughter."The day after I was detained, I was removed from the cell and ... told that they were going to take my daughter a long way away," said Gonzalez-Garcia at a news conference Wednesday, the day her lawsuit was filed.It was then that Gonzalez-Garcia's alleged incident with the officer unfolded. "One of the officers asked me, 'In Guatemala, do they celebrate Mother's Day?' When I answered yes, he said, 'Then Happy Mother's Day,' because the next Sunday was Mother's Day. I lowered my head so that my daughter would not see tears forming in my eyes.""The next day they got us up at 5 in the morning and took us to a trailer, and I was told to bathe and dress my daughter. I hugged my daughter and told her that she didn't have to cry," Gonzalez-Garcia said at the press conference.Officers also allegedly told Gonzalez-Garcia that she would never see her daughter again, making her feel like "collapsing and dying," according to the lawsuit. "I could not understand why they hated me so much, or wanted to hurt me so much," the lawsuit said.The Department of Justice did not immediately respond to CNN's request for comment on the incident.Southwest Key Programs, US Customs and Border Protection, the Department of Health and Human Services and Immigration and Customs Enforcement, all named as additional defendants in the lawsuit, told CNN they are unable to comment on pending litigation.

Gonzalez-Garcia was moved to a detainment center in Colorado, where she stayed for several weeks until a judge granted her bond. On June 22, she submitted a 36-page "reunification packet request" to her daughter's shelter in Harlington, Texas, according to the lawsuit."It was almost two weeks before I heard from my daughter again," said Gonzalez-Garcia. "Since she was taken from me, I have been able to talk to her five times, and she's told me that at times they've had her alone in the room and taken her to counseling because she was crying so much."The girl's eighth birthday came and went without celebration. Gonzalez-Garcia said she could hear the pain in her daughter's voice when she told her how upset she was to spend her birthday without her mother.It was also revealed during a phone conversation that her daughter, who is referred to only as "S.K." in the lawsuit, had been sick with a fever and had contracted conjunctivitis while in detention. She was also hit in the head by another detained child, resulting in a bruise."She's a little girl. She hasn't done anything," said Gonzalez-Garcia. "Why are they punishing her? Why does she keep having to plead to be back with her mother? Why can't they return her to me?"The mother-daughter reunion was further delayed after Gonzalez-Garcia learned that she, along with the friends she was staying with in Framingham, had to provide fingerprints to proceed with sponsorship requests no earlier than July 31. She obtained an attorney through a local immigrant's rights organization, the lawsuit states."We hope that the (court) recognizes that every day that goes by without these two reuniting is adding to the trauma of this child," Susan Church, one of Gonzalez-Garcia's attorneys, said at the news conference. "We've filed a complaint for violation of due process and ask that we have a hearing as soon as possible."

It could take several weeks for Gonzalez-Garcia's reunification request to be carried out, according to the lawsuit. It also claims that Gonzalez-Garcia's government-issued requirements for sponsorship "unreasonably extend family separations that never should have occurred to begin with."After reunification, Gonzalez-Garcia plans to live in Massachusetts, where she can work and her daughter can pursue a formal education. She also has a fundraising page that Church says will assure officials that she can support herself and her daughter while awaiting resolution of her immigration case."One thing my daughter always asks me is, 'Can I have pizza, Mommy?'" said Gonzalez-Garcia. "I promised her, when I found her again, I would buy her a pizza all for herself."Correction: A previous version of this story misstated Susan Church's title. She is one of the attorneys representing Angelica Gonzalez-Garcia. The story also misstated when an incident between Gonzalez-Garcia and an ICE officer unfolded. The incident occurred one day after she was detained.

CNN's Laura Ly and Elizabeth Joseph contributed to this report.